Eurobank winner of Virtus award for contribution to local community 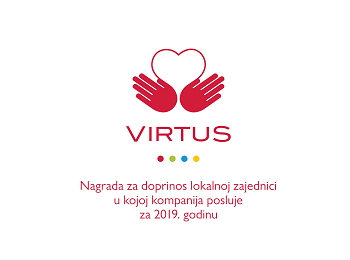 Eurobank is the winner of this year’s Virtus Award for the contribution to the local community, for the “Manchester United Soccer School for Children” project. The partnership between the Manchester United Football Club and Eurobank in the area of payment cards was launched in 2014, with more than 29,000 Eurobank–Manchester United co-branded credit, debit and pre-paid payment cards issued so far. Owing to this partnership, the Manchester United Soccer School was organised for the first time in Serbia in 2019.
“Bearing in mind that social responsibility is one of the key values of both partners - Eurobank and Manchester United, we have included all categories of the youngest in the Soccer School for Children project. In addition to young professional athletes, this experience has also been provided for the children of Eurobank’s employees, clients, partners, and the children from centres for children without parental care and the SOS Children Villages in Kraljevo and Sremska Kamenica,” said Slavica Pavlović, President of the Executive Board of Eurobank.
Through the VIRTUS Award, established in 2007, the Trag Foundation has been promoting philanthropy in our country and motivating a growing number of companies and individuals to join programs and initiatives for the common good for 13 years now. The VIRTUS Award for the contribution to the local community is granted for exceptional achievements in helping resolve issues or meet needs of the community, city or region where a winning company operates. Eurobank, a leader in the area of banking products and services, is the winner of the VIRTUS Award in various categories for 2009, 2010, 2011 and 2014. Since its establishment in Serbia in 2003, the Bank has invested more than 4.5 million euros in supporting the local community where it operates, focusing its activities on the areas where assistance is most needed.