“Neven” kindergarten in Pirot officially opened its renovated playground, which will be used by 252 children. 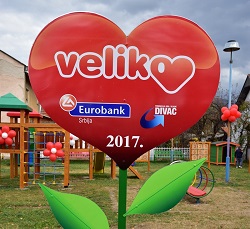 Thanks to the “Big Heart” project and long-standing cooperation between Eurobank and “Ana and Vlade Divac” Foundation, another kindergarten has been provided with better conditions for working with children and support of their development. “Neven” kindergarten in Pirot officially opened its renovated playground, which will be used by 252 children.

The donation was used to purchase a wide range of new playground equipment such as slides, playhouses, seesaws, trains, as well as climbers for the youngest who attend nursery groups. Over the past years, Eurobank and the Foundation have renovated more than 40 playgrounds in kindergartens, rooms and classrooms of schools and health institutions, with the aim of improving conditions for growth and development of the youngest.

“It is our great pleasure that Eurobank and “Ana and Vlade Divac” Foundation helped one more kindergarten through the “Big Heart” project. We are particularly keen to ensure that children are provided with optimum conditions for their growth, learning and development. We see our contribution in the form of renovation of playgrounds exclusively as an additional incentive for children to spend more, better-quality time outside”, said Magdalena Tatić, Head of Household Lending Division at Eurobank.

At the presentation of the donation, children were greeted by Ana Divac, Founder and chairman of executive board of Ana and Vlade Divac Foundation, which is a partner of Eurobank in the project.

“Big Heart is an example of successful cooperation that contributes to social changes primarily related to improving conditions for the growth and development of children”, said Ana Divac on this occasion.
Card with a big heart— “Big Heart” MasterCard is a standard credit card, but its ultimate purpose is to provide children in Serbia with better conditions so they can grow up in a carefree environment. Cardholders who opt for this card bear no additional costs, and by using it, they contribute to an important humanitarian cause—reconstruction of schools and playgrounds and establishment of libraries in preschools and schools throughout Serbia.