For the sixth time in a row, Eurobank provides support as the general sponsor

Belgrade, December 08, 2014 – The Night of Books is becoming a true book festival, where in the course of one evening readers have an opportunity to enjoy works of their favourite authors. Wishing to contribute to the general culture of reading, Eurobank is the general sponsor of this event for the sixth consecutive time. 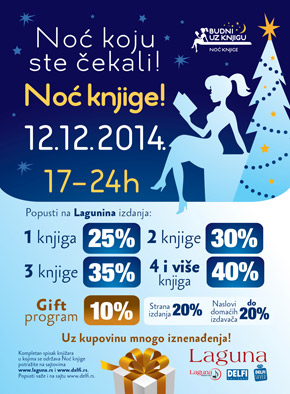 “As a company constantly contributing to the community where it operates, Eurobank once again supports the Night of Books, organised by our long-standing partner, publishing company Laguna. We believe that by promoting culture of reading and making books available, we can really contribute to the well-being of the community as a whole. The influence of books and literature on growing up and intellectual development of all generations is invaluable and Eurobank will strive to support such initiatives in future projects as well,’’ says Magdalena Tatić, Head of the Consumer Lending in Eurobank.

The “Night of Books” will be organised on Friday, December 12, from 5pm until midnight at all Delfi bookstores and readers’ clubs in Belgrade and another 22 cities in Serbia, Montenegro and Republika Srpska.

Eurobank is a European banking organization with total assets of € 77.6 bn (as at 31.12.13), offering universal banking across eight countries. Eurobank has a dynamic presence in Greece and holds lead positions in Bulgaria, Romania and Serbia, offers discerning Wealth Management services in Cyprus, Luxembourg and London and is also present in Ukraine.
For more information on Eurobank, please visit .vietdevtrick/